FICTION IN THE POST-PANDEMIC – EPISODE 11

I hope you haven’t deserted me. A thousand apologies to Tiffany & Mrs Mac fans. A rather busy voluntary role I took on some time ago recently got a lot busier and I have been dragged away from posting the good times and fun capers of our daring duo.

But we are back and let me take up the story.

The last time we checked in on the pair, Mrs Mac had had an epiphany. She had survived what she called a near-death experience when the huge branch of an old oak tree crashed through the window of her hotel room in a ferocious storm. The fact that she wasn’t in the room at the time or anywhere too near the scene was a mere detail. Mrs Mac was sure some heavenly force had intervened to save her life. She was reminded how short and precious life was – and she would make the most of it, embrace it, and even mend her ways. Tiffany, was at first bemused by her grandmother’s remarkable sanguinity in the face of non-imminent danger. Confusion continued when Mrs Mac insisted that a 3-star B&B would be a perfectly adequate place to spend the night (in lieu of a luxury room with a tree branch in situ) and agreed to take the train back to London.

Mes Amis, as you know I enter my little fictional follies in a writing contest run by the Australian Writers’ Centre (AWC). The rules for this narrative entry (which I wrote in 2021 BTW) were thus:  The story had to take place at some sort of contest. The story must include a character who forgets something, and the story had to include the words PRESS, FLING and GROUND, which could be part of a word – ‘underground’ or ‘pressing’.

Tiffany and Mrs MacPhillamy alighted the train at Euston. A porter greeted them, piled their bags high on a trolley and headed to the taxi rank.
“Grandmother, my back is killing me…those seats were…”
Mrs MacPhillamy cut her off. The old lady would brook no complaints. Not today.
“Dear, what can you expect? Since British Rail sold off its service, First Class has never been the same. But we survived!”
Tiffany was gobsmacked. Why was grandma so happy after a three-hour train ride? Where was her usual disdain?
The duo battled their way to the exit. Euston Station was a fairground – people of all shapes and sizes pushing and pressing against each other as they headed through the turnstile.
Mrs Mac smiled.
“Oh, I do love the hoi polloi dear. So invigorating. I’d almost forgotten the smell – humanity bustling about, the raw energy of it all.”
Mrs MacPhillamy pulled out her iPhone, made a call and approached the porter almost with glee.
It was too bemusing for Tiffany, who hadn’t seen grandmother talk to a tradesman, or anyone beneath a hotel concierge, in years.
She seemed to be enjoying her conversation with the man who eagerly pointed to something in the distance and then placed two crisp bills in his pocket.
“We’re off to a pub Tiffy. There’s a good one across the street, I believe.”
And with that, the porter went one way and Mrs MacPhillamy steered Tiffy in the other.
“But Grandma – aren’t we forgetting the luggage? Your Louis Vuitton. It’s vintage.”

“Yes, yes, all arranged Tiffy. The porter will despatch them in a cab and Marjorie’s on hand at the other end to pay the driver. It’s seamless.”
Tiffany relaxed a little; the thought of the maid unpacking and hand-washing her smalls was just what she needed after the bone-jarring journey from the Lake District. The wi-fi had packed it in at Chester and there’d been nothing to do but stare at the scenery.
The ladies pushed open the frosted glass doors of a jaunty pub festooned with flags. At the sight of the well-dressed dowager and her pretty granddaughter, two off-duty tradesmen, bedecked in hi-vis, vacated their seats. 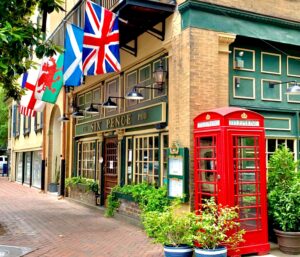 Mrs Mac obliged by ordering the men another pint. Tiffany merely shook her bewildered little head.
A darts competition was in full swing. Cries of “One Hundred and Eighty” accompanied by cheers and applause rang out. Mrs Mac sat transfixed.

Long-forgotten images of her father polishing his beloved silver barrels and affixing the colourful little flights came to mind.
The more handsome of the tradesmen asked Tiffany to join his team and cast a lucky throw.
“What do I do, Grandma?” Tiffy pleaded.
“Well, you take one of those spiky things, grab it by the fluffy end and chuck it at the dartboard. Try not to hit anybody.”
Mrs MacPhillamy exhaled. Lockdown had been long. But life was short. That she would never forget.
She approached the friendly tradesmen: “Pass me a dart gentlemen, I want one last fling.”

Yes, folks as I said we live in strange times. I’ll leave you to ponder Mrs Mac’s sudden metamorphosis. Will she buy a dartboard, join the local public trivia team, or take up gardening and origami? Let’s wait and see where this epiphany takes her.

Until next time ……..and it won’t be that long between drinks this time.

For more information on the AWC’s Furious Fiction contest, check out this website:

Photos courtesy of Unsplash – thanks to Immo Wegmann and Jacob Mathers

Fiction in the time of Covid – Episode 6 Apologies to my many Tiffy & Mrs. Mac fans for not posting the latest episode of the duo’s adventures until now. Let’s call it fiction fatigue […]