Ahoy cruise fans! Here’s a story about ships and the re-start of the Australian cruise industry. I know – a bit of a shock mateys.

So strap yourself in, or nautically speaking tighten that life jacket, put on that floral lei, pour yourself a colourful cocktail complete with paper umbrella, sink into a deck chair and let’s push the boat out.

Yes – I know you know – the media was awash with the story of the Pacific Explorer – and the ship has been filmed from every which angle. The helicopter footage was truly remarkable. Cruise fanatics, and there are many, were jubilant and hundreds lined the shores at Circular Quay, some wearing ‘Welcome Home’ t-shirts, and many a cruise fan was in tears. I maintained a stiff upper lip, but I must say the sight of the ship entering Sydney Heads was pretty special – her entrance was that of a grand lady, a diva who had been away far too long and was now being welcomed home into a warm embrace.

Ok, back to reality  – the facts. P&O’s Pacific Explorer was the first international ship to enter Sydney Harbour in two years and one month – since the Covid-19 pandemic wreaked havoc on our lives and the travel and cruise industry and PM Scott Morrison banned all cruise ships from Australia.

On Monday I was invited on board a smallish boat to cruise out near Sydney Heads to welcome the Explorer back to Sydney. It was a fun event – people were emotional – TV reporters and bloggers were doing live crosses back to their stations and print journalists, like me, were madly scribbling away and clicking off photos as quickly as we could. I met the new P&O president Marguerite Fitzgerald and several other people who were closely connected with the cruise industry and who’d suffered during the two-year shutdown of the industry: travel agents, ship suppliers, contracted shore workers, and many more. All were thrilled that the cruise business was set to start again.

After the event, I raced home and wrote a story for the Cruise Critic website — and here it is. 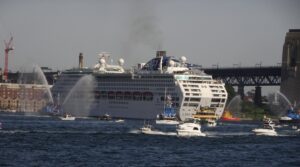 Escorted by five tugs, three spouting plumes of water and draped in “Welcome Home” signs and a flotilla of private craft — both big and small — Pacific Explorer entered Sydney Heads at 9.30 a.m.

The flagship of the P&O Cruises Australia fleet then cruised down the harbour passing historic Fort Denison and the Sydney Opera House to arrive alongside the Overseas Passenger Terminal (OPT) an hour later.

“It was always going to be an emotional homecoming for Pacific Explorer and her crew, and this morning was a fitting celebration for her return to Sydney,” P&O Cruises Australia President Marguerite Fitzgerald said.

“Pacific Explorer coming through Sydney Heads after two long years was a magic moment and I am proud to say there was hardly a dry eye among our suppliers, guests and staff.”

When Will Cruising Resume in Australia?

During the dramatic arrival, helicopters buzzed overhead, ship horns honked and P&O executives, politicians, dignitaries and media, onboard the official welcome launch, jostled for the best position to take photos of the historic moment.

The city that had been lashed with rain for months turned on a perfect autumn day and thousands of Easter holidaymakers were on hand at Circular Quay to watch this unusual sight – the return of a large cruise ship to their city,  the first in to berth at the OPT in the shadow of the Sydney Harbour Bridge in two years and one month to be precise.

The ship will spend the next five weeks preparing for its first official passenger-paying cruise on May 31 — when cruising will resume in Australia.

Ms Fitzgerald said there would be “no false starts,” May 31 is the date that cruising will officially resume, she said. “We have to tell our suppliers — get the message out — we are starting from scratch. The suppliers actually have to grow the food. We have to bring our crew and entertainers back in.”

Australia is one of the last countries in the world to kick start its cruise industry, after Prime Minister Scott Morrison closed all Australian ports to cruise ships on March 15, 2020.

More than seven million passengers have already cruised globally since cruising restarted a year ago.

Where has P&O Pacific Explorer been?

Pacific Explorer, its bow displaying a sign declaring “We’re Home,” had travelled from Limassol, Cyprus, a journey of 28 days, where it had been berthed for most of its two-year absence from Australia.

Onboard the ship were captain Alan Nixon and a skeleton crew of around 250, many of whom stood on the ship’s top deck as it cruised towards Circular Quay.

The ship will spend the next five weeks preparing for its first official passenger-paying cruise on May 31. In the ensuing weeks,  hospitality crew and entertainers will be flown in from all parts of the world, the ship will be restocked and re-provisioned and generally made ship-shape, while a shake-down cruise –  tagged an “activation cruise” (carrying P&O suppliers, loyal passengers and staff) will head out to sea on May 27. Little has changed to the layout of the 1,998-passenger ship, with all public rooms, bars and restaurants bearing the same names and interior design, although cabins and suites have had been refurbished.

Mr Fitzgerald, who joined the company in January, said new health protocols were paramount and had been developed in collaboration with Australia’s eastern seaboard state governments.

They required passengers over 12 years to be fully vaccinated and to undertake either a PCR test within 72 hours or a self-administered rapid antigen test in 24 hours before boarding. She stressed that P&O would adopt the same strict protocols that many overseas ports had already put in practice.

CLIA had long been lobbying the Australian government to restart cruising however despite many resumption dates being bandied around, none had come to fruition, until today.

Many of these suppliers, along with travel agents, tour operators and contract workers integral to P&O’s business were on board the welcome vessel, along with NSW transport minister David Elliott and Port Authority of NSW CEO, Philip Holliday.

All were overjoyed — and relieved — that the cruise ban had been lifted. General manager of travel agency Clean Cruising, Dan Russell, said the cruise suspension and the many promises of its resumption had been like “death by a thousand cuts.”

“Over the past two years, the government would say that cruising would be back in two months and then that wouldn’t happen. Then there’d be another announcement — we had our hopes up so many times,” he said.

Matthew Halloran, who previously worked as a contract shore service officer, said he hadn’t worked for 760 days — even since March 19, 2020, when the beleaguered ship Ruby Princess returned to Sydney amid a flurry of negative publicity.

“By the time I go back to embarkation work when Pacific Explorer heads out on May 31, it will be 800 days. I’ve been driving a school bus since the pandemic hit,” Mr. Halloran said.

Prior to COVID-19 Australia had been the world’s fifth-largest passenger source market, following the United States, Germany, UK & Ireland, and mainland China, with passenger numbers reaching a record 1.34 million in 2018, but dropping by 7.7% in 2019 to a still-healthy 1.24 million.

Which is Ships Will Restart Cruising from Australia in 2022?

With the lifting of the ban, a meaty if not completely fully-fleshed program of cruises from Sydney and Brisbane is planned from late May. P&O will have the lion’s share although ships from Carnival sister brands, Princess and Carnival Cruise Lines, will also arrive in the next few months.

Coral Princess will begin a season of 11 winter cruises from Brisbane on June 16, while Carnival Splendor arrives in Sydney on September 30. Ironically, Splendor had just operated a handful of cruises (following its arrival in Sydney December 2019) when COVID-19 hit. At the time it was the biggest ship ever to be homeported here.

P&O Explorer will be joined by “new” ships Pacific Encounter, in August, and Pacific Adventure in October 2022. Both are former Princess Cruises’ vessels and were originally Star Princess – built in 2002 – and Golden Princess (built 2001) respectively.

Another ship getting in early is Ponant’s Le LaPerouse, which starts a season of domestic cruises to the Kimberley, between Darwin and Broome, from April 28. LaPerouse will join a clutch of small local operators that have been allowed to cruise the region since 2021.

Pacific Explorer’s first cruise, a four-day trip to Brisbane, coincides with the opening of that city’s new cruise terminal on June 2. The ship will then operate from both Sydney and Brisbane on a diverse program of sailings including four-night cruises to Queensland’s Moreton Bay Island, three-night themed cruises including the popular comedy cruises, and an Elvis cruise and 12-night itineraries to the South Pacific islands. Explorer will also sail from Melbourne on a short cruises to Kangaroo Island in South Australia and to New Zealand. It will also take passengers on the line’s first Pride cruise.

Pacific Encounter, based in Brisbane from August 20, will operate two 10-night itineraries to ports in Papua New Guinea and several Great Barrier Reef itineraries. Pacific Adventure will join Explorer in Sydney in October offering a selection of short cruises including a Pride cruise, comedy cruises and a seven-night cruise to Tasmania.

Carnival Cruise Lines, which had planned to kick start its Australian sojourn with two ships — Carnival Spirit and Carnival Splendor — will now operate with just one. Its comeback has been delayed until September 30 when Splendor cruises into Sydney Harbour after a 23-night voyage from Seattle.

Based in Sydney, it will begin a season of cruises to the Great Barrier Reef, Moreton Bay Island, three-day getaways ‘to nowhere’ and longer itineraries to the South Pacific.

Australia’s other seasonally-based line, Royal Caribbean International, will return to Australia in October with two Quantum class ships; Quantum of the Seas will be based in Brisbane, and Ovation of the Seas, will cruise from Sydney. Barrier Reef and Australian coastal cruises are on the agenda, along with itineraries to New Zealand and the South Pacific.

All cruise lines are offering sales and deals, mostly enticing guests with on board spending credits and low deposits. 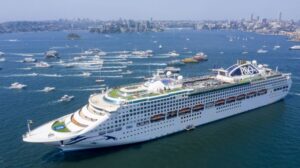 That’s it, shipmates. Stay tuned for more cruise news in the coming months.

Fiction in the time of Covid: Episode 1 When you can’t go cruising or travelling – and write about it for a living – there are still many creative ways to keep your mind nimble. […]

Life aboard a cruise ship is quite the departure from life on dry land – if you’ll pardon the pun. Forewarned is forearmed, so here’s my take on that carefree, colourful and sometimes quite quirky […]