FICTION IN THE POST-PANDEMIC – EPISODE 12

New Year’s Resolution – go boldly into 2023, so I am assuming you get a giggle out of Tiffany & Mrs Mac.

Last night, New Year’s Eve, was dead – no doubt everyone was in the city gearing up to watch their first fireworks in the flesh for the first time in three years.

Tiffany & Mrs Mac were in cold old London but making do with treats from their maid and getting on with life in opposite wings of Mrs Mac’s commodious mansion.

Last time we tuned in, Tiff and Mrs MacPhillamy had gone to a London pub, and got in involved in a darts match (much to poor Tiffany’s bemusement). Mrs Mac was thrilled to be able to mix with the hoi polloi and throw a dart at the board for old times sake.

Her newfound love of the proletariat has not waned since we last caught up with the duo a month ago. This time she wants to share her lucky life with those less fortunate  – at a somewhat safe distance, mind you.

Let’s take up the story.

As you know I enter a regular writing competition through the Australian Writers’ Centre; the comp used to be once a month (which I loved for the disciple of it) but for the past year, the competition has been run only four times a year. Our challenge task is to write a story of up to 500 words in under 50 hours, once we get the green light on the First Friday of the new season (it used to be the first Friday of the month).

I wrote this piece when it was still a monthly competition and the rules for this little fictional entry were thus:

Here it is folks.

She’d been to a pub, caught a long-distance train and stayed in a three-star B&B with not a butler within cooee.

The possibilities seemed endless. Once upon a time, she’d enjoyed the very good life, but truth be told she’d often complained – and at every turn.

But now – it was time for a  paradigm shift. There was a lot more to explore, people of all classes to meet, mundane things to experience. She’d enjoy it this time round or be damned.

Back in London, she’d tried a spot of housework, but the stimulation she’d hoped for just wasn’t there.

Instead, she was happy to let Marjorie, who’d been in her employ for decades, do the heavy lifting. But she would give her maid a sizeable raise. And occasionally she’d try to do a bit; perhaps wave a feather duster over a porcelain vase now and then.

No, she thought, the best use of her remaining years (yes, Father Time’s clock was ticking) was to give back. She had many talents and an array of foibles. It was time to share.

“Tiffany, Darling,” she called to her granddaughter, “come to the morning room. I want to discuss my plan.”

A mass of tousled blonde hair appeared in the doorway, followed by a bathrobe-clad slender body, not quite awake but nonetheless taping on her mobile.

“Tiffy dear, sit down. You know I’m a changed woman. I want to share my gifts, and impart my wisdom. So…..I’m starting a blog.”

Tiffany looked up and searched the tea trolley for the usual buttery croissants and steaming pot of perfectly-brewed coffee.

“Dear – listen up. I’ll get Marjorie to make us an egg on toast. I quite enjoyed that at the B&B. There’s always a first time.”

“What about a Wiki, grandma? Have you thought of that?”

“A Wiki – it’s a collaboration tool. A wiki is a webpage with an open-ended editing system. Other people can add bits and pieces to your thoughts.”

Mrs MacPhillamy was astounded. Tiffany sounded intelligent; she was glad the girl had at least been trying to complete her Social Media Marketing course.

“Sounds thrilling Tiff. But one thing at a time. My blog.”

“Yes, grandma, you could add a Wiki to your blog.” Tiffany slunk back into her chair; exhausted from the intellectual strain so early in the day.

“Yes dear – precisely. It’s ironic. No one expects me to be that old!”

Mrs Mac explained the premise – it would be a weekly digital chat (with photos of course) wherein she’d dispense advice, good-life guidance, and haute-couture hints.

“Let’s just say ‘kaftans, canapes and mid-life capers’. I think it will be brilliant.”

With that Marjorie appeared with an ice bucket of Bollinger. 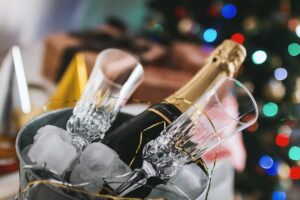 Now, what will Mrs Mac get up to next time? We’ll she see kickstart the blog or will she fall over at the first literary hurdle? Tune in next time to see what the duo and the long-suffering Marjorie get up to!

All photos courtesy of Upsplash – with thanks.

And once again if you’d like to enter the Australian Writers’ Centre Furious Fiction contest – and possibly win $500 (I’m still awaiting my prize money) then here’s the link.  www.australianwriterscentre.com.au

Fiction in the time of Covid – Episode 6 Apologies to my many Tiffy & Mrs. Mac fans for not posting the latest episode of the duo’s adventures until now. Let’s call it fiction fatigue […]

FICTION IN THE POST-PANDEMIC – EPISODE 11 Dear Readers I hope you haven’t deserted me. A thousand apologies to Tiffany & Mrs Mac fans. A rather busy voluntary role I took on some time ago […]

FICTION IN THE POST-PANDEMIC – EPISODE 13 Hi Ravishing Readers Yes, folks, this is a two-way blog and I can see you……just like Miss Susan* in those early episodes of Romper Room who could see […]