Fiction in the time of Covid: Episode 1

When you can’t go cruising or travelling – and write about it for a living – there are still many creative ways to keep your mind nimble.

I decided to enter the monthly Furious Fiction writing competition last September after a friend suggested it. What started as a bit of frivolous fun has turned into something of a passion. I now enter every month. We writers are given a stimulus or a setting and a handful of particular words that must be entered into our 500-word (or less) stories.

Fortuitously for a cruise writer, my first story’s stimulus was a life-buoy, one of those rings you see placed around the decks on cruise ships and ferries. I decided to set my story on the famous Queen Mary 2. 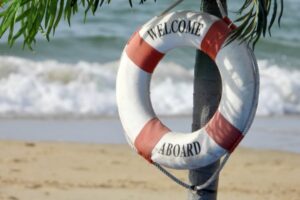 I invented a couple of self-centred characters – the widowed Mrs MacPhillamy and her granddaughter, Tiffany – who were enjoying a world cruise. Since then the two protagonists have become my fictional best friends and I’ve invented many a scenario for them – on land during Covid – over the past eight months.

Here’s my first story. Apart from an idea sparked by a lifebuoy, the story had to begin with SHO and had to include the words stamp, sprinkle, score, slice and switch. I hope you enjoy it.

“SHOWTIME had finished in the grand theatre aboard the Queen Mary 2 and the bejewelled dowagers and their companions repaired to the lounge for a nightcap.

Old Mrs MacPhillamy, whose husband was long dead – a circumstance she did not regret – ordered her favourite tipple from yet another obsequious waiter. The staff knew her, and her oft-spoken-about fortune, well.

“Yes, my usual. Bombay Sapphire, tonic and a slice of lime…not lemon, mind,” she croaked.

Guilfoyle the waiter, who’d just come on duty, made a slight bow never once removing the smile from his face or taking his eyes off the old lady’s wizened visage.

Mrs MacPhillamy’s companion on this world cruise, her fourth circumnavigation of the globe in just as many years, was her 25-year-old granddaughter Tiffany, a flighty girl who had quite a reputation back in England.

Mrs Mac thought the salty sea air might do Tiff the world of good, and as the average age of her fellow passengers was about 75, she reckoned her granddaughter wasn’t likely to fall in love or have a fling and leave her alone on deck with nothing but a blanket over her knees and a hot toddy for company.

But the dowager was a seasoned old salt and knew that the bar staff, deck stewards and cabin boys could be a frisky lot. And not all were gay.  She must remember to give them a sizeable tip, every second day, and a strongly-worded note to leave Tiffany alone if they wanted a bigger gratuity come journey’s end.

Tiffany ordered a vodka shot, much to grandma’s chagrin.

“Do try to cultivate a taste for good gin, dear. Or at least switch to cocktails. What about a lovely Brandy Alexander? They sprinkle it with finely grated nutmeg. Not that vulgar supermarket brand powder.”

Tiffany smiled and knocked back the vodka, beckoned over the waiter and ordered another.

Tiffany might not be the sharpest tool in the shed, having failed her final university exams twice, but she knew the score.

She was there to keep granny company on the high seas – make sure she didn’t fall overboard or die a lonely death in her sumptuous stateroom and to buy postcards and stamps when in port.

She’d drink what she bloody-well liked in the process.

The pair wandered out on deck. The moon was high. It glimmered on the ocean.

Most of the passengers were in bed although a handful of cruise novices, not used to pacing themselves on a 90-day voyage, were doing the rhumba in the ballroom or having a flutter in the casino.

Mrs MacPhillamy sighed; 85 more days of this. It was fun once, but eventually, all things palled.

Tiffany smiled to herself. Tomorrow they’d make landfall in Alexandria. She’d slipped that sleeping pill into Mrs Mac’s last G&T. There was little chance she’d wake before noon, by which time she and Guilfoyle (real name Jarrod) would be halfway to the Pyramids.  What fun!”

Stay tuned for the next instalment when Tiffany discovers the television news.

By the way, anyone can enter the competition. Check out the Furious Fiction website.

Fun for punters on board and behind-the-scenes at Flemington Dressed in a hi-vis vest and rugged up in a coat despite the late spring day, I join a busload of punters, in the true sense […]